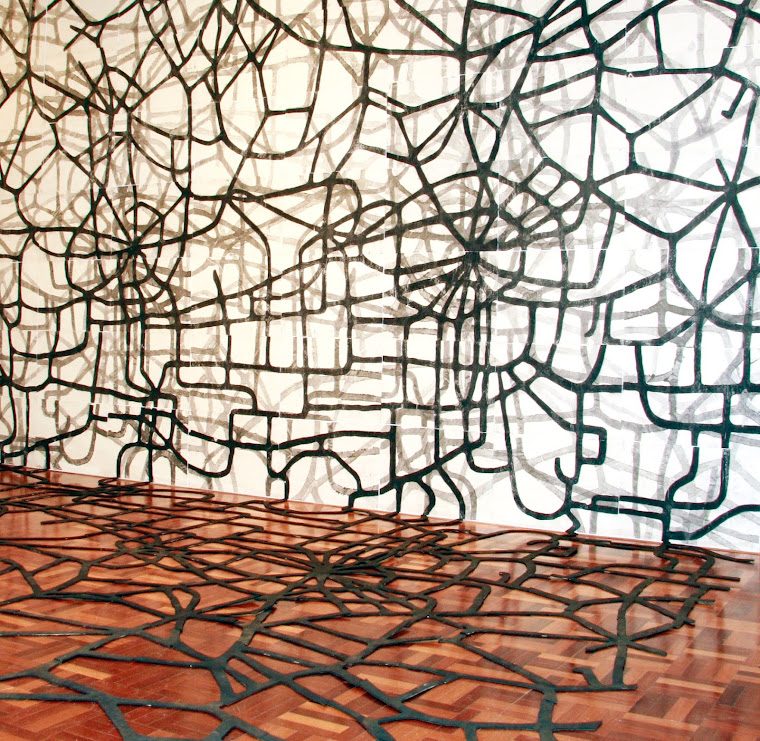 A rhizome way of thinking

Rhizomes Versus Trees is a theory put forward by Giles Deleuze that articulated a shift I was going through in my drawing. I had been doing horizontal drawings of tree shadows when gradually the ground beneath my paper began to asset itself. I became fascinated in the way that grasses travelled in every direction; they had roots burrowing down, tendrils traversing the surface and stems sprouting into the air. They operated in the way I wanted my drawings to operate; they travel across and open up the surface but they could also reach out into the world of the viewer and include them in their system of operation. They also included the history and political systems reflected on Gundaroo Common, my subject at the time.

Deleuze formulated the framework of rhizomes in order to break away from the western tradition of binary logic to what he thinks of as a more natural system. He states that a rhizome model allows for travel in every direction rather than in a linear fashion “It is composed not of units but of dimensions, or rather directions in motion.” Not only did this apply literally to my drawings on the common, it also refereed to my overall ambition of entering into a cross-cultural dialogue with Indigenous Australians.

In this blog I will discuss images and processes that follow a rhizome model. From the process and development of my research on the site of Gundaroo Common I will show how it responds to propositions seen in the work of artists from different cultures. As Deleuze comments “A rhizome ceaselessly establishes connections between semiotic chains, organizations of power, and circumstances relative to the arts, sciences and social struggles”. In this way I aim to investigate connections with other artists and continue to engage in a dialogue through the Visual Arts. 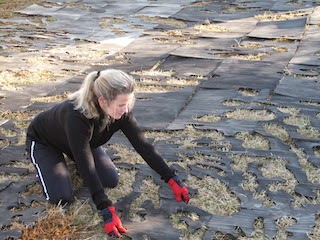 The Grass Variations developed from a residency at Megalo in 2012.  My aim was to continue to investigate the way grasses activate a ground.  I played in the lithography workshop doing many experiments with lithographic washes and colour reduction printing.  I used various grasses to make the marks on the stone by dipping them in tusche and either leaving them on the stone to dry or drawing with them.  I printed up many variations in different colours aiming to collage with the prints later.  I aimed for an 'event' rather than an 'image'.
The theme of variations was inspired by the Bach variations where Bach developed 30 variations from one aria.  I had hoped to bring this 'song' to Gundaroo Common but since being in Kununurra I realise it is just one more imposition on the land.  I would need to work with a musician to create a new song.
The grasses and prints extend my idea of rhizoming where the litho stone acts as a ground for creation and the prints peel off and activate sites away from the original.  In these collages I continue to pursue the concept of 'ground' on 'ground' where each element is a ground in its own right and shifts in its position as you gaze at it.  It works well as a series as the elements are obviously in different locations and sequences in the works.  Individually they are subtler and require time to think about what lies behind the top layer.  I also intend them to play with the concept of the near and far put forward by Edward Casey in his theories of Place.  The object in front is considered the nearest due to our experience of being in place and learning where objects are positioned.  My work aims to challenge this and to reconsider our position on the ground.  If the dirt is closer to us than the rhizome, then where are we being positioned?
The shadows are from wood cut prints developed on Gundaroo Common.  They have formed themselves and make their presence felt in the land. 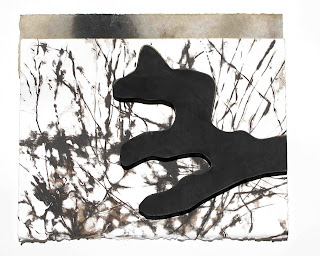 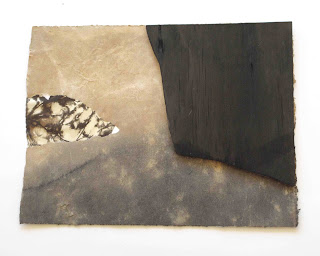 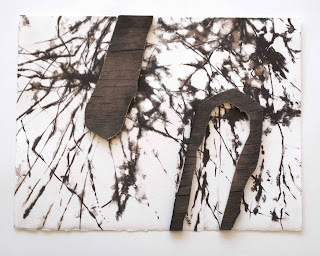 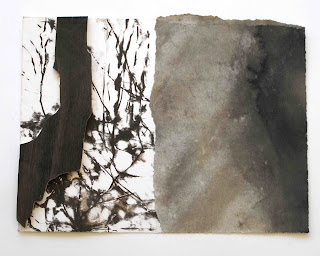 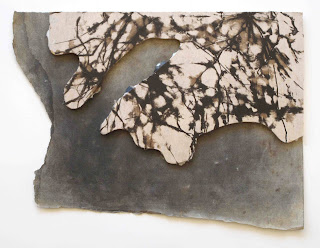 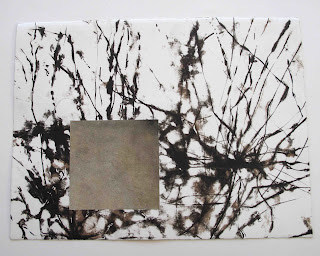 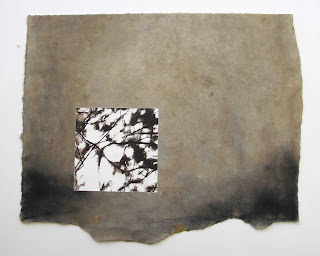 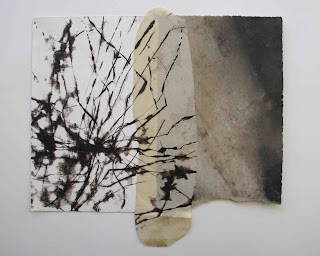 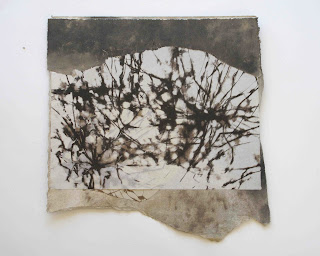 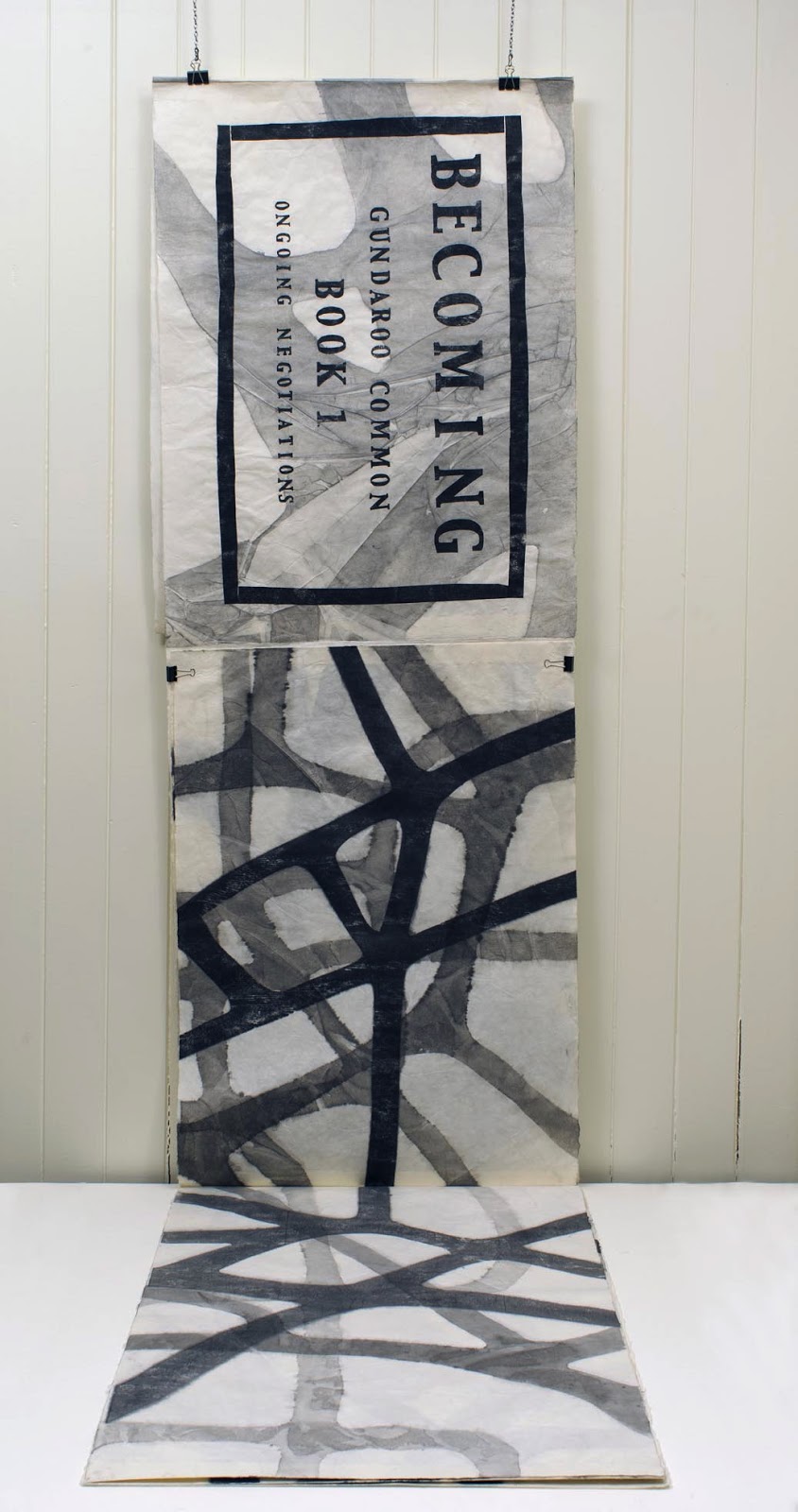 Following on the concept of rhizoming, I sewed the panels of Becoming horizontally to make a book for Grahame Gallery + Editions exhibition: Lessons in History Volume II   There were originally 56 individual prints arranged in a 7 x 8 grid.  Book 1 is the top row of prints sewn together to make an accordion fold-out book.  It is with a soft cover and can also be rolled and posted.  Two books have been made and sold so far, each being unique. Five more books can be made from the remaining rows of prints.

Artist statement from the Catalogue:

Before Democracy there was commoning. Villagers had the right to make a form of living from the common in negotiation with other stakeholders. These rights form the basis for the Magna Carta. As the rights of people to make a living without interference by the state has become untenable Hogan started to re-invigorate the concept behind the original idea of commoning. How do we negotiate back our rights?
The native grasses on Gundaroo Common in the Southern Highlands of New South Wales retain the traces of the shifting histories of the land from Indigenous Australians to the arrival of settlers.  The grasslands were preserved under the law of commoning and act as a reminder of an ancient way of life.  Becoming is an offshoot from the Common and spreads its tendril out into new environments, animating the ground with its message to reclaim the land for the common good of all. 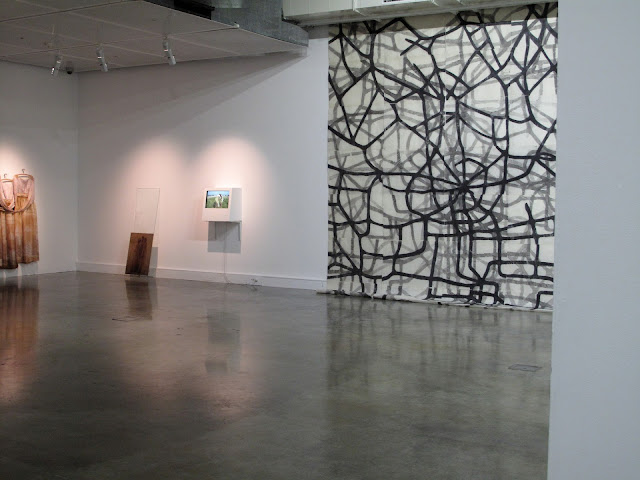 Becoming, installed at Impact7 conference in Melbourne, with Rebecca Mayo's work on left

The large woodblock print that was installed at the Canberra School of Art Gallery was initially glued to a brick wall with watered down Japanese rice paste.  Amazingly it survived being steamed off and was able to break off into another life.  I sewed the work into vertical panels, rolled them up into a post tube and sent them to Melbourne for the Impact7 conference and exhibition.  The work was sensitively placed next to an installation of Rebecca Mayo's work that was also about grasslands.  Her work included a performance in the space called Teeter and Balance.  This was an amazing example of a work breaking off from its original site and gathering nuances and connections to other sites and other artists.
Posted by Jan Hogan at 21:56 No comments:

Jan Hogan
As an artist and educator I am interested in how difference can occupy the same space with respect and acceptance. My interest was initially in cross-cultural dialogues about sharing the land, but as I delve more into the material and psychological depths of what it means to be ‘in place’ I realize my dialogue is with all elements of the environment. Paper is my primary method of exploration whether it is in site-specific drawings or in printmaking. I use it as a membrane of memory to record the marks and traces left on us by the land.